i2S as a new discipline

i2S is an intellectual hub which provides:

The ideas underpinning i2S are described in the following paper and book:

The i2S word cloud contains the names of various  approaches to tackling complex societal and environmental problems. The aim of i2S is to provide a conduit connecting these approaches, as a common underlying discipline which promotes cross-fertilisation. The i2S repository of concepts, methods and case studies draws on resources developed by all of these approaches. i2S also aims to support these approaches by developing new and improved tools and cases.

It is also important to note that there are many researchers seeking to improve understanding of, and action on, complex real-world problems who do not identify with any of the approaches listed in the word cloud. They may be known as T-shaped researchers or knowledge brokers.  They are an additional, important group that i2S seeks to connect with.

The sculpture Kulla's Ripple by Tim Spellman provides a useful metaphor for several key dimensions of i2S. The ANU Sculpture on Campus brochure (which no longer exists), described the sculpture as follows: "The spherical and concave shapes link the two parts of the installation with their suggestion of symbiotic pairs: positive and negative, solid and void, the mould and the moulded. Spellman describes his work as the attempt to create wholeness from the dualities of past and present, the physical and the spiritual."

From the perspective of i2S, three symbiotic pairs are important:

Unlike the sculpture where both elements of the pair are reasonably equal, the symbiotic pairs relevant to i2S are not, with the right-hand element in each pair (intractable problems, systemic research approaches and dealing with unknowns) relatively underdeveloped. Indeed the rationale for i2S is to: a) improve the research community's ability (and therefore the ability of society in general) to deal with intractable problems; b) strengthen systemic research approaches; and, c) advance understanding and management of the unknown.

The sculpture is located on ANU Campus on Chifley Meadow, near the Menzies Library.

These domains depict the three key elements of i2S. They also highlight the importance of formulating policy and practice change taking into account unknowns and not solely relying on existing evidence. 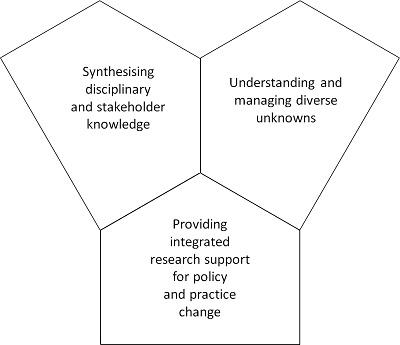 The full i2S framework builds on the three domains image, by labelling each side of the pentagons with the key elements of the five questions which are also an integral part of the framework. 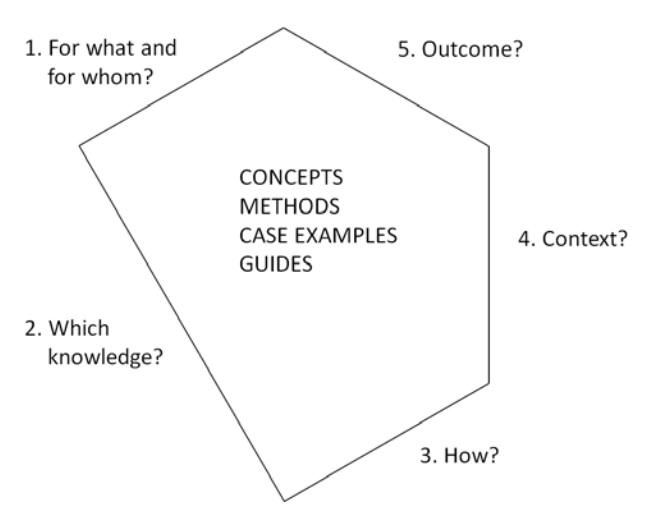 You can find out more about i2S from:

The i2S team gratefully acknowledge many sources of support for the development of i2S. We also provide copyright, terms of use and privacy information for material, including images, on this site.