Description: The framework by Mitchell and colleagues (1997) presents a definition of stakeholders, describes how the attributes of power, legitimacy and urgency can be used to identify relevant stakeholders and shows how prioritising which stakeholders to engage with can be based on whether and how these attributes are combined. The framework was developed in a business context, with adaptations required for a research context (not presented in the original) briefly described.

Business definition: “A stakeholder in an organisation is (by definition) any group or individual who can affect or is affected by the achievement of the organization’s objectives” (Freeman, 1984, p. 46).

Research-relevant definition: Stakeholders are those affected by the problem being researched and those in a position to do something about it (Bammer, 2019).

A key challenge in business and research is identifying which stakeholders are relevant. A systematic way of doing this is through considering who has power, legitimacy and urgency.

One attribute for identifying relevant stakeholders is therefore whether they have or can marshall coercive, utilitarian or normative means to impose their will. Quotations above from Mitchell et al. (1997), p. 865, based on Etzioni (1964).

Legitimacy can have its base at the individual, organisational or societal level and implies a desirable social good. Examples relevant to choosing stakeholders in research are:

There is also a trickier area, which is when legitimate entities act in illegitimate ways. For example, governments, businesses, civil society groups and individuals can act in fraudulent ways or put profit or self-interest above the public good. The marketing of tobacco and gambling are two examples.

A second attribute for identifying stakeholders is therefore the desirable social good that they represent. While legitimacy is often entangled with power, it is important to treat it separately.

Urgency is the “degree to which stakeholder claims call for immediate attention.” (Mitchell et al., 1997, p. 867). In a research-context, a third attribute for identifying stakeholders is therefore to look for those for whom understanding and/or acting on the problem is urgent.

This analysis helps identify “who or what really counts.” (Mitchell et al., 1997). It is also important to identify not only actual but also potential power, legitimacy and urgency and to note that these characteristics can change over time.

Stakeholders are then mapped according to how they rate on each attribute. A Venn diagram such as that shown in the figure below (from Mitchell et al., 1997) can be helpful.

In the business context, “managers have a clear and immediate mandate to attend to and give priority to” the claims of definitive stakeholders.

In the research context, definitive stakeholders have the greatest call on being able to influence the direction of the research and the research processes, through advisory boards, participation or co-production.

Expectant stakeholders (high in 2 of the 3 characteristics of power, legitimacy and urgency): Next in importance or “expectant” are those who rate high on two of the three characteristics:

Dangerous stakeholders (high power and urgency): Stakeholders who lack legitimacy often resort to coercion, which makes them dangerous. In the business context they may use tactics that hold the firm to ransom, such as hacking and adverse publicity. In the research context an example is stakeholders whose vested interests are threatened by the research, who may, for example, seek to discredit the research and/or the researchers.

Latent stakeholders (high in 1 of the 3 characteristics of power, legitimacy and urgency): Least important or “latent” are those who only rate high on one characteristic:

Whether or not these stakeholders are taken into account depends on the time and energy that managers (in a business context) or researchers (in a research context) have. They are often worth keeping an eye on in case they develop a second characteristic over time. The first two groups of stakeholders also often have little interest or motivation to get involved in the business or research. ‘Demanding’ stakeholders may seek to influence the research, but with no power or legitimacy, may be treated as an annoyance. An example in a research context is a lone individual concerned about a particular problem who uses various means to try to get researchers interested.

The diagram and analysis can also be helpful to stakeholders in figuring out how to position themselves to be more influential. 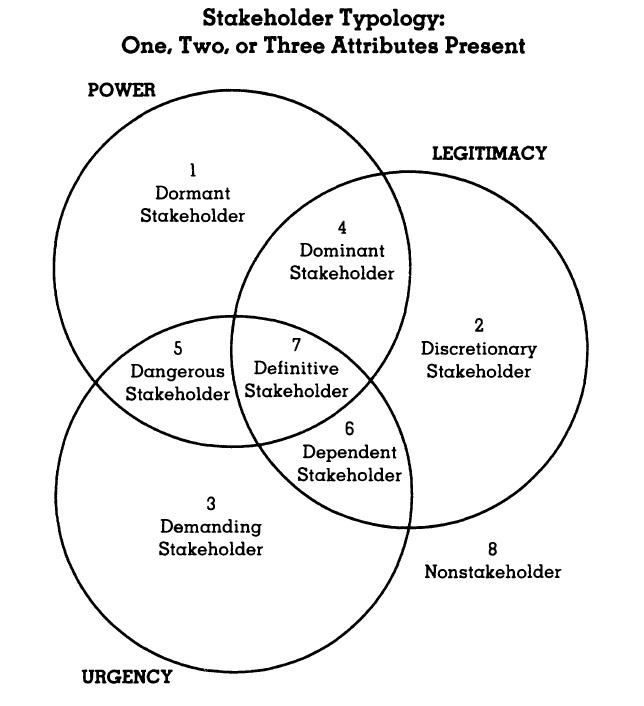 Related topics on the i2Insights blog: