Description: It is useful to characterise different kinds of unknowns and to show their relationships in a taxonomy.

Each of these terms is then further divided into other kinds of ignorance or unknowns. The key issue is that the taxonomy demonstrates that there are multiple kinds of unknowns, many, if not all, of which will be inherent in any complex societal or environmental problem. 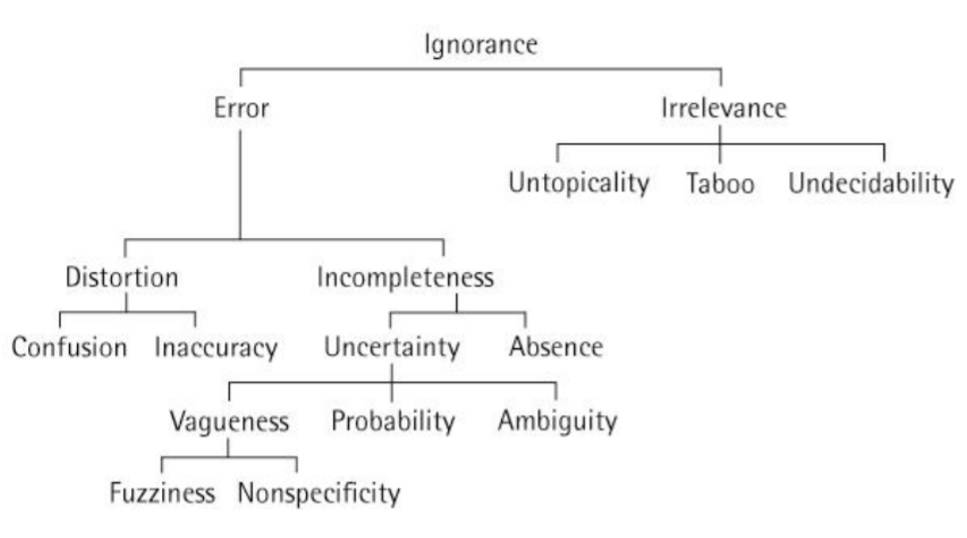 Having differentiated passive (error) from active (irrelevance) ignorance, let us examine the types of unknowns under ‘error’. Two primary sources of error are “distortion” and “incompleteness.”

One type of distortion, ‘confusion’, involves wrongful substitution, mistaking one attribute for another. Mistaking a block of cheese for a bar of soap is an example of confusion. The other, ‘inaccuracy’, is distortion in degree or bias. Assuming that all swans are white is an example of inaccuracy.

‘Uncertainty’ refers to partial information and can be subdivided into three categories:

Vagueness can then be subdivided into ‘fuzziness’ and ‘non-specificity’. Fuzziness refers to fine-grade distinctions and blurry boundaries. For example, an object may be dark, but there is no clear boundary where darkness begins and ends. Non-specificity is another kind of vagueness. An example relates to geographical location. To say that someone lives near a school does not give any indication of whether they are a 5- minute walk away or a 5-minute drive away.

Moving on to probability, the classic example refers to numerous tosses of a fair coin and the likely outcome that half of the tosses will land heads and half tails. Much statistics involves tackling problems which combine vagueness and probability. While probability does not help us with the vague statements provided as illustrations in the previous paragraph, it can assist with other vague statements, such as ‘this ticket may win money in the lottery’ or ‘today some drivers will be injured in an accident’. Probability then helps us calculate the chance of winning or being injured.

Ambiguity is best demonstrated though a linguistic example. To say that food is hot does not clearly tell us if this refers to temperature or spiciness.

The final item in the ‘error’ side of the taxonomy is “absence”. Absence is simply gaps in knowledge, which can be known or unknown gaps. This is where the matrix of three kinds of unknowns fits.

The ‘irrelevance’ arm of the taxonomy refers to issues that are deliberately or unconsciously overlooked. It is useful to identify three subcategories: