Arnstein’s ladder has eight steps of participation, ranging from non-participation and tokenistic to genuine engagement, as shown in the figure below. 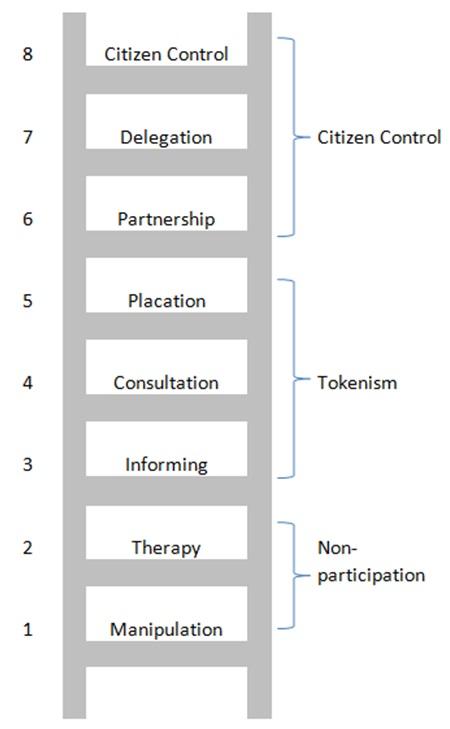 The two bottom rungs are manipulation and therapy. Manipulation refers to putting stakeholders on “rubberstamp advisory committees or advisory boards” to educate them or engineer their support. Therapy involves changing the stakeholder view of the problem.

Informing, consultation and placation are weak forms of participation, and may be tokenistic, especially if genuine participation is promised. Although informing and consultation (which often occurs through surveys, meetings and hearings) are first steps in genuine participation, they do not constitute this on their own. At a minimum, there needs to be assurance that concerns and views expressed will be taken into account. Placation involves working with “a few handpicked ‘worthy'” stakeholders, who are not accountable to the broader stakeholder group. They have neither the numbers nor the legitimacy to actually wield influence.

Partnership, delegated power and citizen (or stakeholder) control constitute genuine participation, involving power sharing and joint decision making. Partnership involves shared planning and decision-making responsibilities through agreed structures and ground rules that are not subject to unilateral change. Delegated power occurs where stakeholders have dominant decision-making authority and can ensure that the research is accountable to them. Citizen or stakeholder control exists when they initiate and oversee the research. In all three cases stakeholders would generally be involved in research design, data collection and interpretation.