Purpose: To identify personal values that are robust across cultures and that can help explain diversity and conflict in values.

Description: Six main features, relevant to all values, are described first. This is followed by an outline of ten basic personal values, with a guide to which are congruent and which conflict.

These six features are relevant to all values.

The Schwartz theory of basic values identifies ten broad personal values, which are differentiated by the underlying goal or motivation. These values are likely to be universal because they help humans cope with one or more of the following three universal requirements of existence:

The ten broad personal values are:

Dynamic relations among the values

Relations among these 10 broad personal values are dynamic. Actions pursuing one value “have consequences that conflict with some values but are congruent with others.” This has “practical, psychological, and social consequences.” “Of course, people can and do pursue competing values, but not in a single act. Rather, they do so through different acts, at different times, and in different settings.”

The figure below provides a quick guide to values that conflict and those that are congruent. There are two bipolar dimensions. One “contrasts ‘openness to change’ and ‘conservation’ values. This dimension captures the conflict between values that emphasize independence of thought, action, and feelings and readiness for change (self-direction, stimulation) and values that emphasize order, self-restriction, preservation of the past, and resistance to change (security, conformity, tradition).”

Tradition and conformity are located in a single wedge because they share the same broad motivational goal. Tradition is on the periphery because it conflicts more strongly with the opposing values.

“Hedonism shares elements of both openness to change and self-enhancement.” 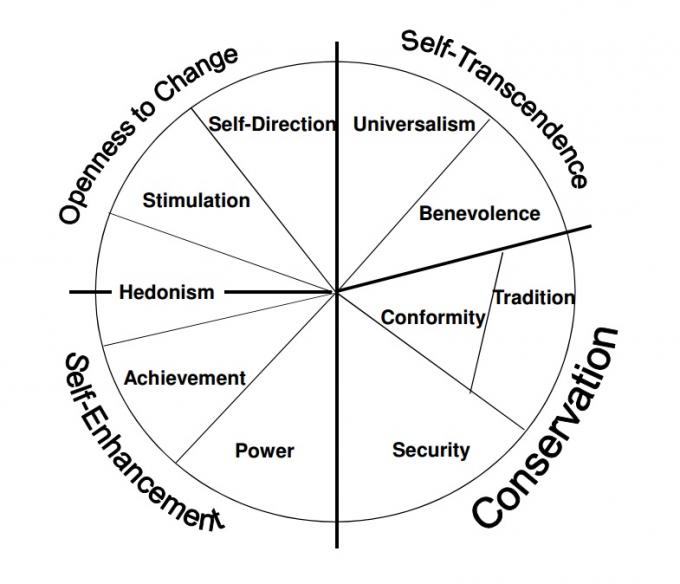 There are two major methods for measuring the basic values: the Schwartz Value Survey and the Portrait Values Questionnaire.

Schwartz’ work also examines relationships between different values in more detail, which is useful for a richer analysis of how values affect behaviour and attitudes, as well as the interests that they express.