A useful analytical framework for assessing knowledge co-production consists of the following elements:

The framework was used to analyse “what types of actors contributed what kind of knowledge in which research phase” in four transdisciplinary studies by Enengel et al (2012). 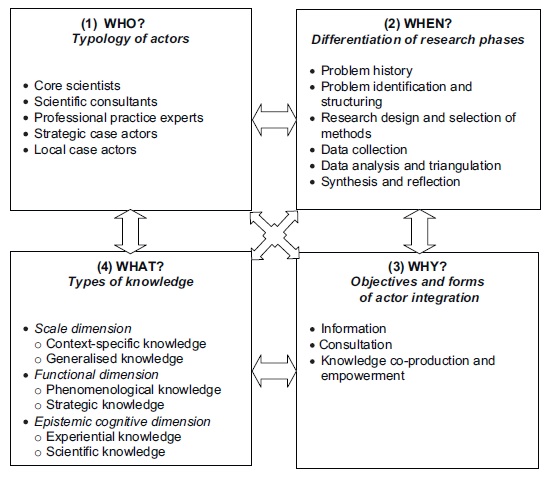 (1) Typology of actor roles: Collaboration in transdisciplinary research “comprises both the collaboration between researchers from different disciplines and between actors within and outside academia.” Five categories were developed: (a) Core scientists, who are “the main scientific actors throughout the course of a project” (b) Scientific consultants , who “support the core group in particular project phases” (c) Professional practice experts, namely “practitioners, typically working in public agencies or NGOs” (d) Strategic case actors, namely “practitioners involved at case level with a specific formal or informal responsibility (e.g. local politicians, leaders of stakeholder groups) or professional competence (e.g. regional managers)” and (e) Local case actors, who are “all other actors involved in the processes at the case level.”

(3) Objectives and forms of actor integration, comprising three types of involvement: (a) Information, where actors are “informed about the research project”; (b) Consultation, where actors comment on proposals and contribute ideas and suggestions; and (c) Knowledge co-production and empowerment, where “actors have a say in developing, implementing and running the research project.”

(4) Types of knowledge: the knowledge contributions of different actor groups at various stages of the project were described using three dimensions: (a) Scale dimension: “Context-specific knowledge refers to the concrete setting of the individual case.” “Generalised knowledge claims to be universally valid. It is expressed in a systematic way and free from context-specific conditions and constraints”; (b) Functional dimension: “Phenomenological knowledge addresses (local) social and environmental phenomena and their description. It often focuses on the description and explanation of particular elements of the analysed system”. Strategic knowledge focuses “on connections and interrelations of system elements. It often addresses organisational, functional and network issues for changing the system, and is essential for structuring research processes”; (c) Epistemic (cognitive) dimension: “Experiential knowledge is derived from one’s own life experience or adopted traditional knowledge, and is often tacit or implicit and therefore usually not formalised or systemised.” “Scientific knowledge is based on empirical evidence or scientifically acknowledged theories; it is systematic, formalised and … explicit.”